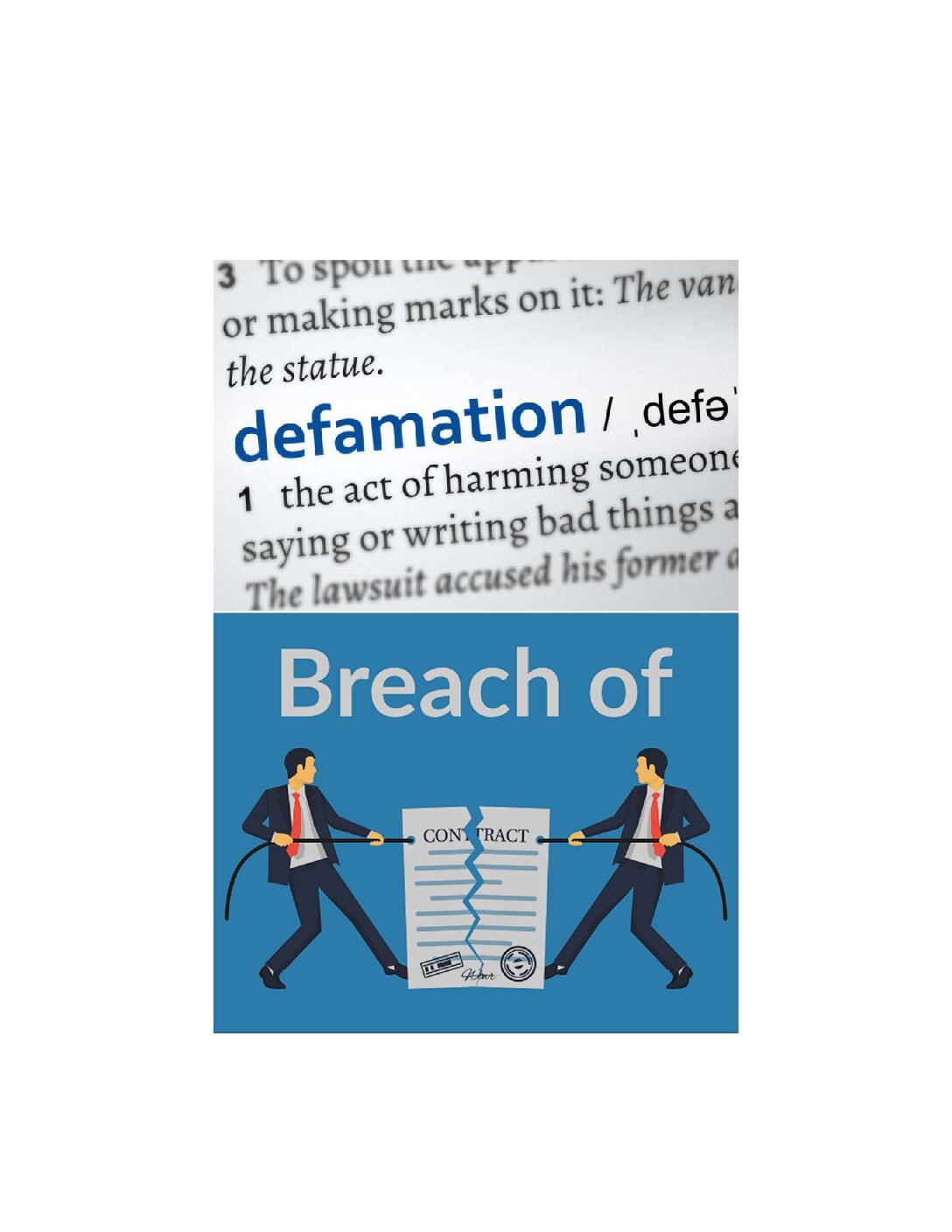 Many times, business owners have contracts with non-disparagement provisions. They rightfully demand and receive assurances from their business associates that they will not disparage the business owner or any of its products or intellectual property. In short – if this goes south, don’t badmouth my company or my products for any reason, and we have a deal.

Unfortunately, business relationships end. Sometimes they end badly. If a former business associate starts running your name through the mud all over town, what can you do? Is it defamation? Breach of contract? Both?

Defamation and Breach of Contract Defined

First, some basic definitions. What exactly is a breach of contract? Defamation?

A breach of contract claim arises when a party to an agreement (either written or oral) fails to perform a material term of that agreement and causes the other party damage, usually in the form of money. As it is with most other claims, the party who was damaged must be free from any fault or have been excused from performing his/her/its end of the bargain (for example, due to the breaching conduct). The damaged party can seek a specific spread of remedies, most notably economic damages in the form of lost profits. However, it’s not possible to seek so-called “punitive” or “exemplary” damages, which are intended to punish and make an example out of the guilty party. So, people breach contracts on purpose all the time if it suits their purposes and they can pay off the claim quickly and easily. It’s routine and nobody bats an eye.

Defamation, by contrast, is known as a “tort.” Broadly speaking, defamation is defined in most (if not all) jurisdictions as a false, unprivileged, and defamatory statement about a person (or corporation). The essence of the claim, as you can imagine, is injury to one’s reputation. Defamation is labeled “per se” if the statement made is defamatory on its face and nothing needs to be added to make the defamatory meaning understood. If you lie and say someone is a thief when you know that person isn’t a thief, it’s pretty clear you meant to hurt the person’s reputation. As a “tort,” defamation carries its own spread of remedies – including the punitive/exemplary damages discussed briefly about above.

As you can see, there are marked differences between the claims. But you can also see a situation where they overlap. What happens if calling someone a thief, when you know that person isn’t a thief, is also in breach of a non-disparagement agreement you have with that person? Can you get money for both claims?

Case Study: Defamation and Breach of Contract Are Only Mutually Exclusive at the End!

In a case the firm is currently prosecuting in Los Angeles County Superior Court, Mr. Federici represents a small business against an independent contractor salesperson for the business. The salesperson signed a contract which included, among other things, a non-disparagement provision. When the salesperson wasn’t getting his way on part of the deal, he posted a defamatory statement to his popular website calling Mr. Federici’s client’s products’ safety and efficacy into question. Mr. Federici’s client sued for defamation and breach of contract.

The defense raised a challenge to the complaint on the grounds that the two pleaded causes of action – defamation and breach of contract – are “duplicative” of each other. The defense argued Mr. Federici’s client had to choose one or the other, since they essentially claimed the same thing, i.e., the defamatory statement caused harm to Mr. Federici’s client.

Mr. Federici successfully defeated the motion using a legal doctrine known as “election of remedies.” Put in simple terms, a plaintiff to a lawsuit can plead as many overlapping and inconsistent remedies in a complaint as the plaintiff wants! The judge agreed. So while eventually the plaintiff will have to choose between defamation and breach of contract, as one court put it: “An act that constitutes a breach of contract may also be tortious.” (Acadia, California, Ltd. v. Herbert (1960) 54 Cal.2d 328, 336-337 [emphases added].)

If you’re a business owner whose good name is being sullied by someone out to get you, you can sue that person for every claim the facts and evidence can support. At the time of judgment after trial, however, you have to make a dealer’s choice as to which remedy you want.

If you find yourself in a similar situation, give the firm a call. Mr. Federici routinely handles these types of claims both as plaintiff and defense counsel, defeats motions such as the one described above, and can help guide you through the nuances of the law such as election of remedies for defamation and breach of contract.